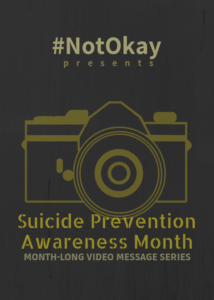 September was Suicide Prevention Month and, in commemoration, we shared video messages to the public of Trinidad and Tobago who may be struggling with suicidal thoughts, to encourage them to keep going.

Trinidad and Tobago has the third highest suicide rate in the region. We need to start talking about suicide and feeling comfortable with expressing our suicidal thoughts if we are to bring down those numbers.

Battling suicide can be an isolating experience, and because our country has a general culture of not openly discussing such things, we thought it would be such a breath of fresh air, and make a difference in someone’s life, to hear anti-suicide messages from other local citizens, all around them.

For this campaign, we enlisted the help of citizens from around the country, to send positive, hopeful messages to anyone in Trinidad and Tobago struggling with suicidal thoughts. Videos were released periodically on social media.

A special thank you to everyone who took part and contributed messages.

Below are the videos of participating members:

That feeling you get when you in a crowd and you feel just absolutely alone, as if you don't matter, I get it.Message by member of #NotOkay team, Kenycia Doyle.

©The Not Okay Movement 2022, all rights reserved